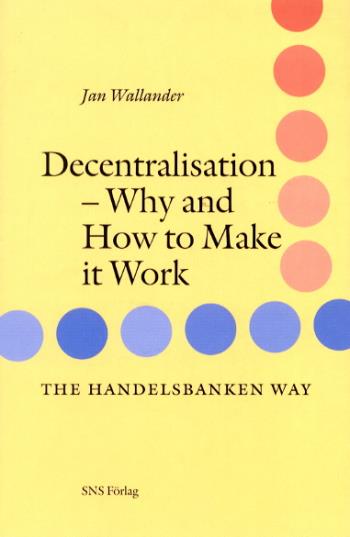 Decentralisation - Why And How To Make It Work (Bok)

This book describes a way of leading and organising a company which is radically different from that practised by most companies. The starting point is that there are certain timeless human demands that should be met by any organisation. This will lead to organisations that are radically decentralised. The fundamental principle of decentralisation was put to the test when Handelsbanken was completely reorganised 33 years ago. The head office was cut down by a third and (among other things) all budgeting and long term planning was abandoned. Since then the external circumstances in which banks have to operate have varied very much. Handelsbanken has, however, always followed the same basic principles in its work and by doing so has been extraordinarily successful. In this book you will find a description of the ideas behind the principles and a detailed account of how such a different organisation functions. Jan Wallander was born in 1920. After his doctors degree in economics he worked as a scientist and became associate professor at the University of Stockholm. He left the university career in 1960 when he became managing director of Sundsvallsbanken, a provincial bank in the northern part of Sweden. Ten years later he was appointed CEO of Handelsbanken. Subsequently he became Chairman of the Board of the bank. He retired from the bank in 1991, when he was made Honorary Chairman. He has been chairman and a member of the boards of many private and Government-owned companies and is still active as author and lectures.