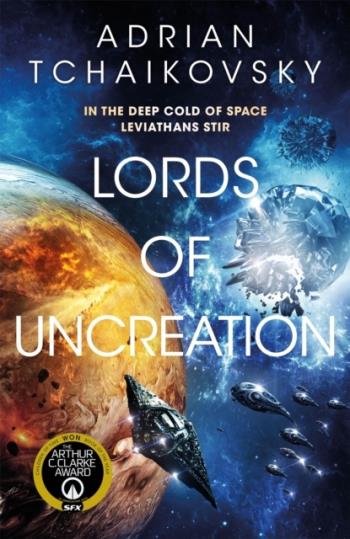 
From Adrian Tchaikovsky, author of Children of Time and winner of the Arthur C. Clarke Award, Lords of Uncreation is the final high-octane instalment in the Final Architecture space opera trilogy.He's found a way to end their war, but will humanity survive to see it?Idris Telemmier has uncovered a secret that changes everything - the Architects' greatest weakness. A shadowy Cartel scrambles to turn his discovery into a weapon against these alien destroyers of worlds. But between them and victory stands self-interest. The galaxy's great powers would rather pursue their own agendas than stand together against this shared terror.Human and inhuman interests wrestle to control Idris' discovery, as the galaxy erupts into a mutually destructive and self-defeating war. The other great obstacle to striking against their alien threat is Idris himself. He knows that the Architects, despite their power, are merely tools of a higher intelligence.Deep within unspace, where time moves differently, and reality isn't quite what it seems, their masters are the true threat. Masters who are just becoming aware of humanity's daring - and taking steps to exterminate this annoyance forever.

The Hyena And The Hawk
Bok