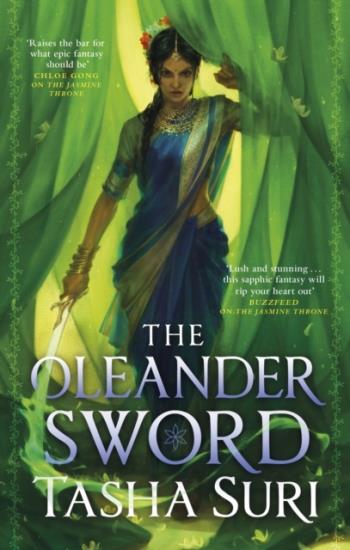 Now, award-winning author Tasha Suri's provocative and powerful Burning Kingdoms trilogy continues with The Oleander Sword. The prophecy of the nameless god - the words that declared Malini the rightful empress of Parijatdvipa - has proven a blessing and curse.

She is determined to claim the throne that fate offered her. But even with the strength of the rage in her heart and the army of loyal men by her side, deposing her brother is going to be a brutal and bloody fight. The power of the deathless waters flows through Priya's blood.

Thrice born priestess, Elder of Ahiranya, Priya's dream is to see her country rid of the rot that plagues it: both Parijatdvipa's poisonous rule, and the blooming sickness that is slowly spreading through all living things. But she doesn't yet understand the truth of the magic she carries. Their chosen paths once pulled them apart.

But Malini and Priya's souls remain as entwined as their destinies. And they soon realize that coming together is the only way to save their kingdom from those who would rather see it burn - even if it will cost them.

Jasmine Throne - Tiktok Made Me Buy It! The Indian-inspired Sapphic Fantasy
Bok