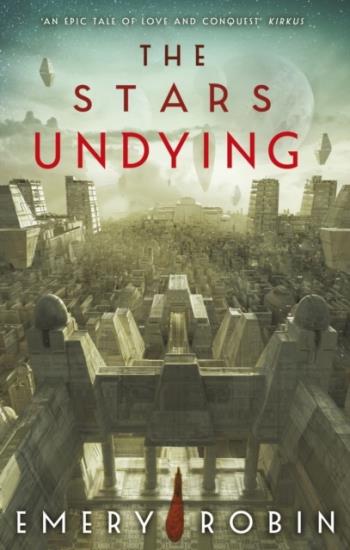 Princess Altagracia has lost everything. After a bloody civil war, her twin sister has claimed not just the crown of their planet Szayet but the Pearl of its prophecy, a computer that contains the immortal soul of their god. Stripped of her birthright, Altagracia prepares to flee the planet - just as Matheus Ceirran, Commander of the interstellar Empire of Ceiao, arrives in deadly pursuit. Princess Altagracia sees an opportunity to win back her planet, her god, and her throne . . . if she can win over the Commander and his distrustful right-hand officer, Anita.

But talking her way into Commander Matheus's good graces, and his bed, is only the beginning. Dealing with the most powerful man in the galaxy is almost as dangerous as war, and Altagracia is quickly torn between Matheus and the wishes of the machine god that whispers in her ear.

For Szayet's sake, and her own, Altagracia will need to become more than a princess with a silver tongue. She will have to become a queen as history has never seen before - even if it breaks an empire.

'Dazzling, transportive, boundless, precise - and dares to ask, what if Mark Antony was the hottest butch girl in space?' Casey McQuiston

'A glittering triumph that weaves together history and tragedy into a star-spanning epic. I fell into this book and didn't come out for a long time' Everina Maxwell

'Deftly wields the conventions of science fiction to make old stories new... I did not know I could weep for Antony, love Cleopatra, or lament Caesar, but through Ana, Gracia, and Ceirran, I do' Maya Deane

'Beautifully written, with poise and wit and grand epic sweep, The Stars Undying has everything I want from a space opera' AK Larkwood