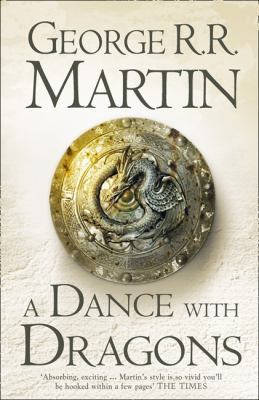 A Dance With Dragons (Bok)

The long-awaited fifth volume in the hugely popular and highly acclaimed epic fantasy A SONG OF ICE AND FIRE The last of the Targaryons, Daenerys Stormborn, the Unburnt, has brought the young dragons in her care to their terrifying maturity. Now the war-torn landscape of the Seven Kingdoms is threatened by destruction as vast as in the violent past. Tyrion Lannister, a dwarf with half a nose and a scar from eye to chin, has slain his father and escaped the Red Keep in King's Landing to wage war from the Free Cities beyond the narrow sea. The last war fought with dragons was a cataclysm powerful enough to shatter the Valyrian peninsula into a smoking, demon-haunted ruin half drowned by the sea. A DANCE WITH DRAGONS brings to life dark magic, complex political intrigue and horrific bloodshed as events at the Wall and beyond the sea threaten the ancient land of Westeros.