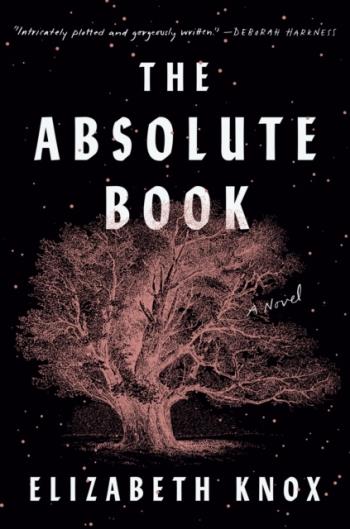 A bewitching epic fantasy about a revenge killing, a mysterious scroll box that has survived centuries of fires, and the book that changed everything

"Intricately plotted and gorgeously written, The Absolute Book is a cinematic tale that is by turns dark and dreamlike, yet ultimately hopeful." --Deborah Harkness, New York Times bestselling author of A Discovery of Witches

Taryn Cornick believes that the past--her sister's violent death, and her own ill-conceived revenge--is behind her, and she can get on with her life.She has written a successful book about the things that threaten libraries: insects, damp, light, fire, carelessness and uncaring . . . but not all of the attention it brings her is good.

A policeman, Jacob Berger, questions her about a cold case. Then there are questions about a fire in the library at her grandparents' house and an ancient scroll box known as the Firestarter, as well as threatening phone calls and a mysterious illness. Finally a shadowy young man named Shift appears, forcing Taryn and Jacob toward a reckoning felt in more than one world.

The Absolute Book is epic, action-packed fantasy in which hidden treasures are recovered, wicked things resurface, birds can talk, and dead sisters are a living force. It is a book of journeys and returns, from contemporary England to Auckland, New Zealand; from a magical fairyland to Purgatory. Above all, it is a declaration of love for stories and the ways in which they shape our worlds and create gods out of mortals.