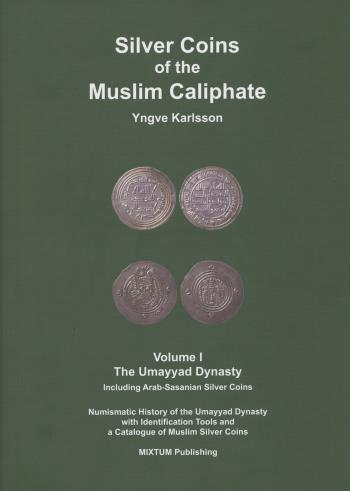 Silver Coins Of The Muslim Caliphate- The Umayyad Dynasty (Bok)

Silver Coins of the Muslim Caliphate, Volume I, The Umayyad Dynasty is the first book in a series of at least two books. It is a direct continuation of the book Sasanian Silver Coins (ISBN 978-91-982341-0-7). The time frame for the content of the book is CE 652 to CE 751, so just under 100 years. Both the Arab-Sasanian and the Post-Reform silver coins are covered. An attempt is made to list all combinations of mint and year for this period. Identification tools are provided for reading mint, year of manufacture and any name that may appear on the coin. Arab-Sasanian coins mostly use the Middle-Persian language using the Pahlavi script, while the Post-Reform coins use Arabic. Conversion tables for years of different eras, such as Muslim Era, Yazdgerd Era and Post-Yazdgerd Era to the Common Era are also given. Yngve Karlsson is a private researcher living in Göteborg, Sweden. He is a member of the Oriental Numismatic Society and the Göteborg Numismatic Society. After the release of his first book Sasanian Silver Coins, he has given lectures on Sasanian numismatics in Italy, Belgium, Germany, China and The Netherlands. For many years he has helped metal detectorists, museums and universities with the identification of Sasanian and early Islamic coins. Such coins are found in large numbers every year in the Nordic countries using metal detectors.

Way Of The Wolf
Bok