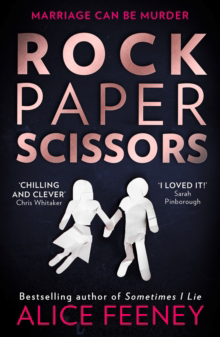 Soon to be a Netflix series from the producer of The Crown. The phenomenal new thriller from the bestselling author of Sometimes I Lie. 'Chilling and clever, with a twist so sharp you'll get whiplash' Chris Whitaker, author of We Begin at the End Ten years of marriage.

Ten years of secrets. An anniversary they'll never forget. Adam and Amelia are spending the weekend in the Scottish Highlands.

The remote location is perfect for what they have planned. But when their romantic trip takes a dark turn, they both start to wonder - can they trust the one they're with? Because every couple tells little white lies. Only for Adam and Amelia, the truth is far more dangerous.

What readers are saying about ROCK PAPER SCISSORS 'I was HOOKED! Brilliantly written . . .

A gripping twisty page turner' 'Multi-faceted characters hiding lots of secrets, brilliant plot and clever twists kept me at the edge of my seat to the very end!' 'I flew through the pages as it was impossible to put down! Brilliant!' 'Alice Feeney wins for the greatest plot twists!' 'This was an addictive read. I. Could.

The twist was spectacular'

I Know Who You Are
Bok

His And Hers
Bok