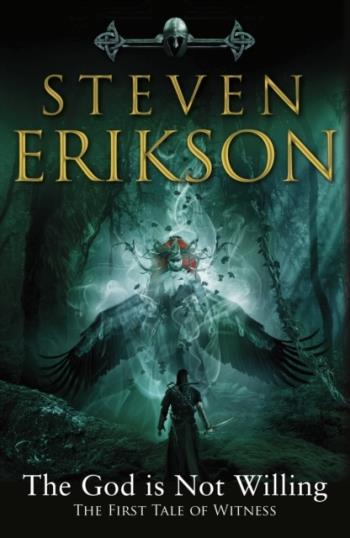 God Is Not Willing (Bok)

The thrilling opening chapter in an epic new fantasy from the author of The Malazan Book of the Fallen...

Many years have passed since three Teblor warriors brought carnage and chaos to Silver Lake. Now the tribes of the north no longer venture into the southlands. The town has recovered and yet the legacy remains. Indeed, one of the three, Karsa Orlong, is now revered as a god, albeit an indifferent one. In truth, many new religions have emerged and been embraced across the Malazan world.

There are those who worship Coltaine, the Black-Winged Lord, and the cult of Iskar Jarak, Guardian of the Dead, is popular among the Empire's soldiery. Responding to reports of a growing unease among the tribes beyond the border, a legion of Malazan marines marches towards Silver Lake. They aren't quite sure what they're going to be facing, but, while the Malazan military has evolved and these are not the marines of old, one thing hasn't changed: they'll handle whatever comes at them. Or die trying.

And in those high mountains, a new warleader has risen amongst the Teblor. Scarred by the deeds of Karsa Orlong, he intends to confront his god even if he has to cut a bloody swathe through the Malazan Empire to do so. But further north, a new threat has emerged and now it seems it is the Teblor who are running out of time. Another long-feared migration is about to begin and this time it won't just be three warriors. No, this time tens of thousands are poised to pour into the lands to the south.

And in their way, a single company of Malazan marines . . . It seems the past is about to revisit Silver Lake, and that is never a good thing .

The Name Of The Wind
Bok