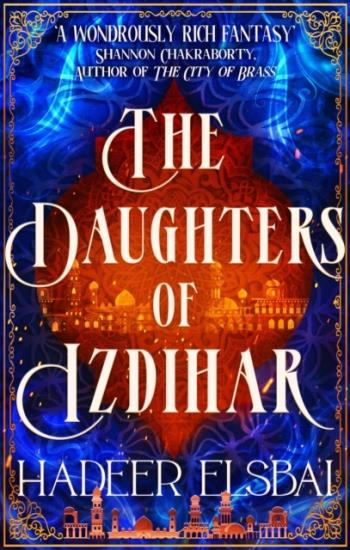 The Daughters Of Izdihar (Bok)

Trapped in an arranged marriage to a man she does not love, Nehal dreams of attending the Weaving Academy. There, she can take control of her powers, bending any water to her will, and pursue a glorious future on the battlefield with the first all-female military regiment. Her husband, indifferent and secretive, is in love with another woman, a poor bookseller named Giorgina.

Giorgina has her own secret. She is an earthweaver with dangerously uncontrollable powers. Her only solace comes from meetings with the Daughters of Izdihar, a women's rights group fighting for freedom. They come from very different means, yet Nehal and Giorgina have more in common than they think.

Enticed by the group's enigmatic leader Malak Mamdouh, the two women are drawn into a web of politics, violence and threats of war as they find themselves fighting to earn - and keep - a lasting freedom.

A powerful feminist fantasy set in an Egyptian-inspired world, with breathtaking elemental magic and sapphic romance, perfect for fans of The Jasmine Throne and The Once and Future Witches.

Praise for The Daughters of Izdihar:

'Hadeer Elsbai has written a powerful story of sisterhood, love, and struggle within a rich, vibrant world with complicated characters that leap from the page to smash the patriarchy!' P. Djeli Clark, author of A Master of Djinn

'A wondrously rich fantasy that highlights the true struggle to revolutionize a society. . . a debut not to be missed' Shannon Chakraborty, author of The City of Brass

'Action-packed, magic-filled, and led by two fierce, vividly-rendered women, The Daughters of Izdihar is a compelling and empowering debut' Ava Reid, author of Juniper and Thorn

'A thrilling tale of two women's fight for rights in their patriarchal society, peppered with elemental magic, politics, and a relentless desire for that which is wrongly forbidden.' Andrea Stewart, author of The Bone Shard Daughter

'A powerful fantasy novel filled with clever magic, intriguing politics, and compelling characters who forge a path toward justice, no matter the obstacle' Chelsea Abdullah, author of The Stardust Thief

'An absolutely enthralling tale of two women striving for a better world' Sarah Beth Durst, author of The Queen of Blood

Pod - 'a Pacy, Provocative Tale Of Survival In A Fast-changing Marine Lands
Bok

Only the strong survive 2022
CD