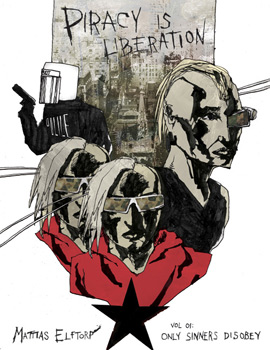 Mattias Elftorp's postapocalyptic cyberpunk epic Piracy is liberation is set in the far future in a gigantic city where the inhabitants have no idea that things could be different. It is political theory, filtered through autobiography, masked as fiction in the form of cyberpunk postapocalypse... This book: The story of a future city where Capitalism has become religion. A future city where the people are being kept ignorant and obedient through mandatory television, not knowing that things have ever been different or that anything exists outside the city. A city where downloading random information is used as a drug. An illegal drug, and if you go against the commandments you are a sinner and nobody loves a sinner. A city where the Priests, Masters and Police run everything, using deadly force to ensure order and profits. A city not unlike our own world. A city where only sinners disobey. A city that is ready to burst. Collects Piracy is Liberation books 001-006 into one massive bigger format volume.

After The Ends Of The World 2
Bok

A Subtle Fuck You
Bok