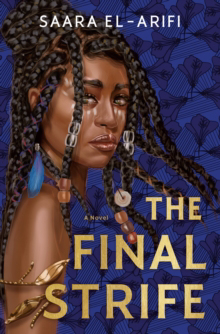 Red is the blood of the elite, of magic, of control.

Blue is the blood of the poor, of workers, of the resistance.

Clear is the blood of the slaves, of the crushed, of the invisible.

Sylah dreams of days growing up in the resistance, being told she would spark a revolution that would free the empire from the red-blooded ruling classes tyranny. That spark was extinguished the day she watched her family murdered before her eyes.

Anoor has been told shes nothing, no one, a disappointment, by the only person who matters: her mother, the most powerful ruler in the empire. But when Sylah and Anoor meet, a fire burns between them that could consume the kingdomand their hearts.

Hassa moves through the world unseen by upper classes, so she knows what it means to be invisible. But invisibility has its uses: It can hide the most dangerous of secrets, secrets that can reignite a revolution. And when she joins forces with Sylah and Anoor, together these grains of sand will become a storm.

As the empire begins a set of trials of combat and skill designed to find its new leaders, the stage is set for blood to flow, power to shift, and cities to burn.

In The Quick
Bok