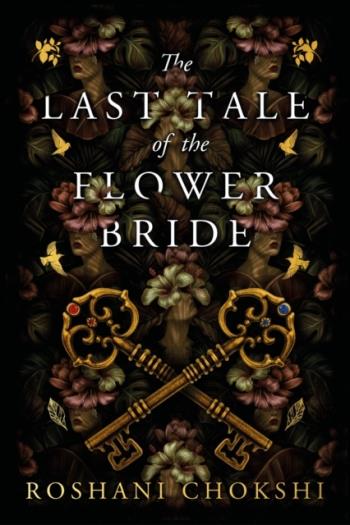 The Last Tale Of The Flower Bride (Bok)

A sumptuous, gothic-infused story about a marriage that is unraveled by dark secrets, a friendship cursed to end in tragedy, and the danger of believing in fairy tales - the breathtaking adult debut from New York Times bestselling author Roshani Chokshi.

Once upon a time, a man who believed in fairy tales married a beautiful, mysterious woman named Indigo Maxwell-Castenada. He was a scholar of myths. She was heiress to a fortune. They exchanged gifts and stories and believed they would live happily ever after - and in exchange for her love, Indigo extracted a promise: that her bridegroom would never pry into her past.

But when Indigo learns that her estranged aunt is dying and the couple is forced to return to her childhood home, the House of Dreams, the bridegroom soon finds himself unable to resist. For within the crumbling manor's extravagant rooms and musty halls, there lurks the shadow of another girl: Azure, Indigo's dearest childhood friend, who disappeared without a trace.

As the house slowly reveals his wife's secrets, the bridegroom will be forced to choose between reality and fantasy, even if doing so threatens to destroy their marriage . . . or their lives.

Combining the lush, haunting atmosphere of Mexican Gothic with the dreamy enchantment of The Invisible Life of Addie LaRue, The Last Tale of the Flower Bride is a spellbinding and darkly romantic page-turner about love and lies, secrets and betrayal, and the stories we tell ourselves to survive.

A Short History Of The World In 50 Lies
Bok

A Murder Is Announced
Bok