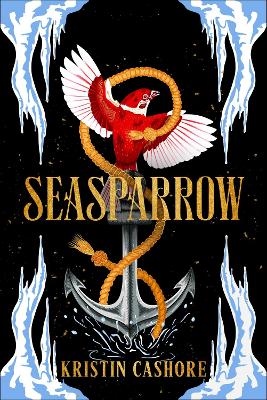 The fifth novel in the bestselling and award-winning Graceling Realm series focuses on Hava, Queen Bitterblue's spy, and her harrowing journey back to Monsea after the events of 2021's Winterkeep.

In the immediate aftermath of the events of Winterkeep, Bitterblue and her entourage begin the journey back to Monsea with the only copies of the formulas for the zilphium weapon. Bitterblue must decide what she will do with her world-shaping power. But before they've even made it halfway home, storms drive their ship off course and then they wreck in the ice far north of the Royal Continent. The survivors must make a harrowing trek across the ice in order to make it back to Monsea.

Seasparrow is told entirely from the point of view of Hava, Bitterblue's personal spy and secret half sister. And while Bitterblue grapples with how to carry the responsibility of a weapon of mass destruction, Hava must decide what she will do with herself in the new world Bitterblue will make.